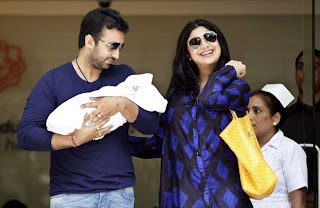 Shilpa Shetty gave birth to a baby boy and her husband, businessman Raj Kundra, says though people are already calling the newborn by various names, the couple have yet to decide on a name. "People are calling him little Raj, someone is calling him baby K and various other names, but wehave not given him any name yet," said the 36-year-old while talking to reporters Tuesday for the first time after the birth of his son.
Shilpa and Raj tied the knot in 2009, and their first child was born May 21.
Raj said his mother-in-law, Sunanda Shetty, will finalise the alphabet.
"I have told my mother-in-law to pick an alphabet as she knows about astrology. So, whatever alphabet she gives us, we will decide the name accordingly," Raj said.
As far as the celebrations go, Raj said: "For now, we will first go home when the doctors discharge Shilpa. She will rest first and then we will decide."